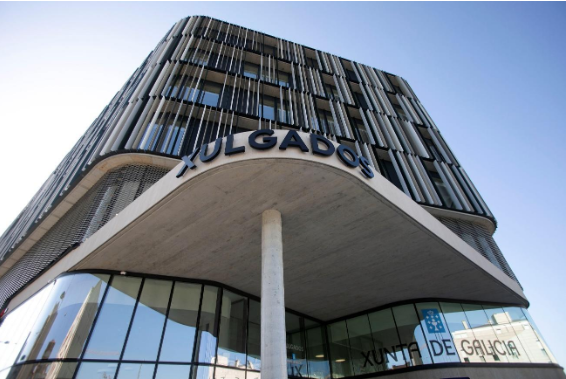 THE NEW JUDICIAL BUILDING, WHICH HAS REQUIRED AN INVESTMENT OF 21 MILLION EUROS, HAS 8 FLOORS AND A TOTAL OF 23,000 M² CONSTRUCTED.

The President of the Xunta de Galicia inaugurated yesterday the new judicial building in Pontevedra in which 21 million euros have been invested. Pontevedra now has a judicial building “modern, beautiful and rational” that, together with the current courts of A Parda, will form an authentic “Cidade da Xustiza” that will serve the half a million inhabitants of the judicial district. The President of the Xunta, Alberto Núñez Feijóo, emphasized this during its inauguration.

The building has two floors below ground for parking and archives, and six floors above ground. On the ground and first floors are installed the civil registry, 16 courtrooms and offices for lawyers, social workers and prosecutors. The second to fifth floors house the facilities of the 28 judicial units planned (courts of first instance, commercial, contentious-administrative and social).

The building has a sensibly circular floor plan and the rooms are organised around a central courtyard that serves to provide lighting and ventilation to all the judicial units, while at the same time facilitating independent circulations depending on the uses.

The structure of the building is made up of waffle slabs of concrete that allow large spans to be saved.