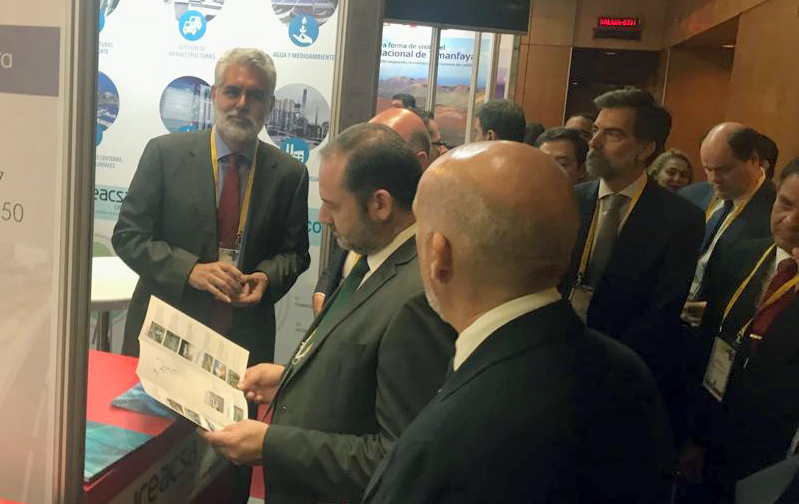 ICEACSA Group actively participates in the VI Ibero-American Road Safety Congress (CISEV) held in Lima with its own stand and the presentation of two papers, one of which received the second prize for the best free communication.

Under the motto “Solutions for sustainable roads and cities” the VI CISEV was held in the city of Lima on 16, 17 and 18 October. The inauguration was presided over by the Minister of Development of the Government of Spain, Mr. Jose Luis Ábalos Meco, the Minister of the Interior of Peru, Mr. Mauro Arturo Medina Guimaraes, the Vice-Minister of Transport and Communications of Peru, Mr. Carlos Estremadoyro Mory, as well as the President of IVIA, Mr. Jacobo Díaz Pineda and the President of ILIEV, Jorge Lazarte Conroy.

ICEACSA Group has participated in the Congress with the presentation of two papers that analyzed relevant aspects on the matter in some of the works developed in Spain for the Directorate General of Traffic (public authority competent in the area of traffic management at the level of the Government of Spain) and a European Union R+D+i Project that develops in Team with the Directorate General of Traffic, the Ministry of Public Works, ITS Spain (association of which ICEACSA Group forms part) and with other private companies; the intervention of ICEACSA Group obtained the second prize for the best free communication.

Under the heading “INNOVATION AND ROAD SAFETY. THE DEVELOPMENT OF COOPERATIVE SYSTEMS. THE C-ROADS EUROPEAN PROJECT. SUBPILOTO GALICIA”, ICEACSA Group presented the progress made in the C-Roads Spain project funded by the European Innovation Agency under the CEF (Connecting European Facilities) programme. Under the premise that an informed driver is a safer driver, this innovation project is experimenting with the deployment of new road safety services based on cooperative technologies. David Cota was awarded for this paper by the Scientific Committee of the Congress with the second prize.

In addition, ICEACSA Group, together with a panel of experts from Peru, Panama, Argentina and Spain, participated in the technical session dedicated to discussing the challenges of public road safety policies in the region, reflecting on the need for standardization and use of appropriate technological tools for road safety and mobility management.

The main theme of the Congress is the fact that the great challenge of reducing the number of accidents at the beginning of the decade 2010-2020 has not been achieved, although the accident rates in the Latin America and the Caribbean region have fallen significantly compared to 2010 and there have been considerable improvements in all areas of work, so that just over a year after the end of this decade, it is necessary to carry out a critical analysis and lay the foundations for a new approach to fighting road traffic accidents and their consequences.

For this reason, the VI CISEV proposes as a great challenge to set goals for the next UN Decade of Action in view of the approaching 2020 time horizon and, thus, to continue insisting on the importance of road safety improvement strategies being incorporated into the major State policies of the countries of the Region. An interesting technical approach that has aroused great interest from experts, companies, organisations, public administrations, multilateral banks, associations and all those who have something to say or contribute in this field; objectives to which ICEACSA Group joins.