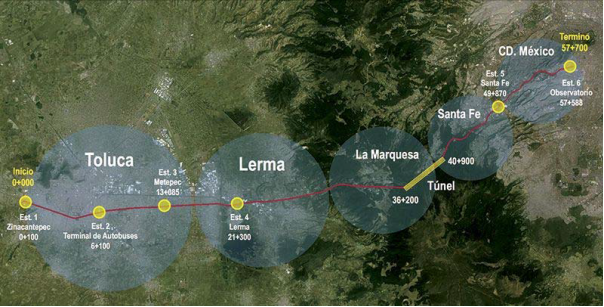 This infrastructure, along with the new Mexico City airport, is one of the star interventions of President Peña Nieto’s current mandate, and its demand is expected to reach 400,000 passengers a day in 2,042.

The General Directorate of Rail and Multimodal Transport of the Ministry of Communications and Transportation (SCT) of Mexico has just awarded the consortium formed by ICEACSA Mexico and the Mexican company Ingeniería y Construcción 3G, for a duration of 7 months, the contract of “Supervision for the construction of footings, piles, columns and headers, as well as the ground movements necessary for the conclusion of Sections 1 and 9 of the Elevated Viaduct (Section III) Observatory – Santa Fe – Tunnel “, which are part of the integral project of transport of passengers “Interurban Train Mexico – Toluca”.

The scope of works will begin with a preliminary analysis of all contractual documentation; then the coordination and supervision of the construction works will be carried out, verifying the correct fulfillment of the specifications of the project in terms of quality, costs and deadlines; the tests and start-up of the equipment will be monitored until its full operation to the satisfaction of the SCT; and will conclude with the settlement and reception of the works.

The Interurban Passenger Train Toluca – Valle de México is a long-distance passenger railroad construction project and design speed 160 km/h, that will connect the Metropolitan Area of the Toluca Valley, capital of the State of Mexico, with the West of Mexico City. This action, which is part of the National Plan for Infrastructure of the Government of Mexico, consists of the construction of a railway line of almost 60 km (approximately 4.5 km in tunnel and 46 km in viaducts) and whose expected demand is 250,000 passengers a day at the time of putting into operation, at the end of 2017, with a growth to 400,000 passengers per day in the year 2,042. The planned investment will be around 48,000 million pesos (about 2,300 million euros).

Click here to view the videos of the Interurban Train Mexico – Toluca.