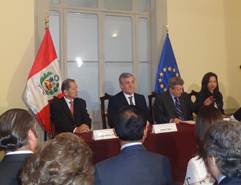 A delegation of european businessmen and European Commission officials involved in a visit to Peru with the aim of strengthening trade ties with that country.

ICEACSA Peru participated on 23 and 24 January in the visit that European Commission Vice-President D. Antonio Tajani made to Peru, accompanied by a delegation comprised of other top european entrepreneurs, with the aim of strengthening bilateral economic ties between the two regions.

The day began with a reception by the Vice-President Tajani to the group of european businessmen attending this event. After the act, the entire delegation moved to the Ministry of Foreign Affairs to meet there with several Ministers and Deputy Ministers of Peru and formalize five bilateral agreements between the European Union and Peru.

Subsequently, the whole retinue went to the Presidential Palace where it had the honor of being received by the President of the Republic of Peru, He. Mr. Ollanta Humala, who spoke a few words to the audience which emphasized his interest in increasing relations between Peru and the European Union, so that both parties can benefit from them.

The visit was completed with meetings between European and Peruvian companies at the Pacific University and with a reception by He. Ambassador of the European Union in Peru.